Lebanon to Hanover and Back

This morning it was forecast to be cloudy and warmish with the clouds eventually breaking and a high of 74 F. So I felt it would be a good day to get a ride in. Guess what? The weathermen got it way wrong. Not only was it a bit chilly, the clouds never really broke and the wind was howling at around 40 miles per hour if I had to guess.

Lucky for me it was all downhill and that ferocious wind was at my back for the ride into Hanover. I had planned to try getting some cool shots of some older buildings in town or on campus and grab some shots of a couple sculptures.

I got one ho hum shot of an older library and a couple sculptures, but, not nearly as many as I had hoped. One of the pieces I had planned on shooting is in the middle of what is now a major construction project. But as we often have to, I adapted and overcame. In the end I got a few miles in and a couple of decent shots, still not getting as good of results as i would like, but I guess it will come with more practice. 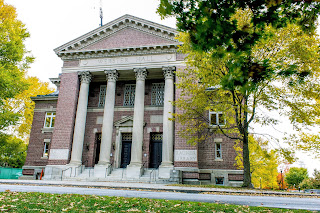 On the way home I was treated to going uphill from Hanover to Lebanon on 120 back into that same brutal wind. But I made it, and it wasn't all that bad.

Tomorrow I plan on getting out again, riding more miles, and taking more photos of even better quality. Hopefully the weather guys get it right, because its supposed to be a great day as far as the weather is concerned. Will try and report back tomorrow with a ride report and some fresh photos.

Posted by dudeonabike at 5:03 PM