My lovely girlfriend found this absolutely amazing section of bike path while perusing the Road Biking Northern New England book she got me for my birthday. It was a little over an hour drive from where we live, but it was a gorgeous day for a drive through the mountains. The fall foliage is just starting to show up which made the views during the drive that much more spectacular. Neither of us had been to Franconia Notch yet, so this was a new adventure for the two of us to enjoy for the first time. 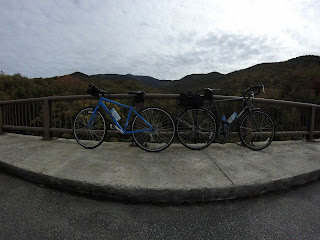 The bike path is 8.8 miles long and is paved doubletrack. We went on a Friday, and with it being after Labor Day, there weren't too many other walkers, joggers, or cyclists on the path. Indeed, at times it felt like we had the trail to ourselves. The trail has some moderately sttep climbs and descents which make it a heck of a fun ride. I really enjoyed some of the descents where I may or mayI think I read somewhere the trail was built because cyclists are not allowed on I-93 and there are no other secondary roads to take in order to get through the notch. It's so narrow that Highway 3 and I-93 actually merge and become one through the notch.

Starting at the Flume Gorge Visitor Center Parking Lot and heading North, the path is generally taking you uphill. We couldn't have planned this any better in my book. I prefer to do the climbing (or wind fighting) ont he way out in an out-and-back ride. Then you get to relax on the way back. The trail takes you through some very scenic parts of Franconia Notch. One of the highlights for us though was definitely the Governor Gallen Memorial. Here you are treated to some magnificent views of Mount Lafayette on one side and down over I-93 you get a different view of the mountains to the northeast. This was also a great spot to stop and have a snack or two. 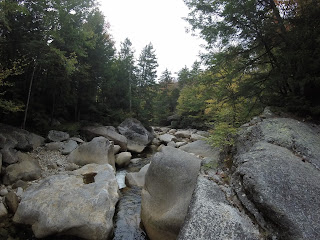 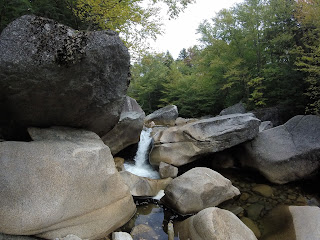 The path also takes you right along Echo Lake which is very scenic. We thought about stopping by the Old Man of the Mountain, but since the profile has fallen off, it doesn't seem as cool to me. There are pictures of it before the collapse online as well as at the site. The old man fell down on May 3, 2003. I really wish I could have seen him perched high above Profile Lake, where he sat for millions of years, but such is life. the public did not want anyone to recreate the old man so now its just a cliff, but still quite pretty. 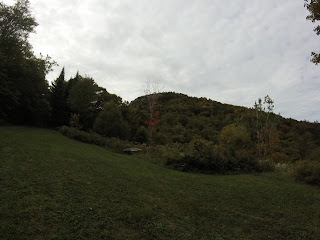 Another point of interest along the bike path is the Basin. We didn't really stop here, but I'm told there is some cool rock formations and cascades around The Basin that are worth the extra walking. The first several miles after leaving the visitor parking lot, the trail stays pretty close to the Pemigewasset River. This provides you with plenty of little spots to stop and view the crystal clear river. Many of them have some cascades as well which are very pretty and make great photo subjects.

We made it back safely to the Flume Gorge Visitor Parking lot after what seemed like an all downhill ride back south. We were tempted to do the two mile hike to check out the gorge. But didn't really feel like paying to do so, and by this time we were both thinking about where we might stop on the way home for food. Usually we try and find some good local spots on Yelp. This time though we ended up stopping at an Applebees. Tell you what though, it was pretty damn good after our almost nineteen mile ride through the mountains. 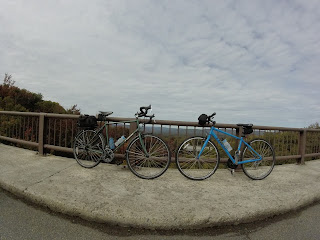 Posted by dudeonabike at 6:04 AM