Obviously this review is a little late considering Trek has already got the 2017 520 out. And it certainly looks just as slick. If you had asked me 10 years ago if I would be the owner of a touring bicycle I would have laughed. Ten years ago, I was still riding a BMX bike. Then I moved onto a mountain bike for a few years. When I moved to a more urban area I wanted something more efficient and opted for a singlespeed, which I later turned to fixed gear.

Fixed gear got me more into road riding and riding for transportation, not just exercise and recreation. I started looking at road bikes and was strongly considering getting a Madone. But I just couldn't do it because it seemed such overkill and may not suit my more utilitarian side. Then I kind of fell in love with the idea of one day just hitting the road on a bike and going cross country. This got me looking into touring bikes.

I looked at Surly Long Haul Trucker and countless others. When I stumbled on the Trek 520 I could remember my old neighbor and parent's friend had a Trek 520 mountain bike that he adored and road everywhere. I did some research and found Trek has been making the 520 for decades. I went and checked some out. I eventually picked one up from my local bike shop.

I couldn't be happier. I have rode this bike over a thousand miles since picking it up in June so I think its broken in and I am qualified to give it a proper review. The first thing that jumped out at me when we went for the first ride together was the smooth shifting provided by the bar-end Shimano shifters. This is the first bike I have ever owned that is equipped with these kind of shifters. Initially it was weird to reach down there each shift, but it quickly becomes second nature.

The butted chromoly touring frame is plenty stiff for power transfer, yet forgiving on rough roads. During our thousand miles of riding she has certainly been put through the paces, and never let me down. The chromoly fork has eyelets for fenders and lowrider rack mounts. Currently I am without a front rack, so I cannot speak to how the bike handles with a front low-riding load. I suspect it handles just fine.

The reviews online were mostly positive. The only real negative things i saw were complaints about the wheel quality and the saddle. Firstly, I have never bought a bike and kept the stock saddle on it, ever. To me, that's not really a part of the bike. I am a huge fan of the Brooks saddles I found when I got into fixed gear.

The other negatives people mentioned related to the wheelset, which is Shimano Deore hubs, and Bontrager rims. Broken spokes was the topic of most of the bad reviews. After about 500 miles of good riding, there was a funny noise coming from the back wheel. Luckily it was just a loose spoke. It was re-tightend and rode another 500 miles. At the 1000 mile mark my 520 had its first tune up. Prior to the tune up shifting was getting just a little sloppy due to stretched cables. Happily, the bike shifts like new again, and is ready for our next adventure.

People also complained about the stock Bontrager Hard-Case tires. Based on that, my plan was to ride until I got a flat then by new rubber. Guess what? I'm still rolling on my stock Bontrager tires 1000 miles (and some change) later. Now that it's been said, no doubt, our next ride will involve a flat.

The drivetrain has performed very well for me. Initially we bombed all over North Carolina and now we're tackling the mountains of New Hampshire. The front derailleur is Shimano alivio and is friction shifting at its funnest. This took me some getting used to. The rear derailleur is the well-tested, and loved Shimano Deore. With the bar-end shifter in index mode shifting the rear derailleur is still crisp after a thousand miles. The beefy crank is a Shiman Trekking M590 with 48/36/26 chainrings. It's not very often I wish for lower gears, but it does happen on occasion. The rear Shimano HG50 casette is fitted with 11-32. The original KMC X9 chain is still on the bike.

Drop bars and Shimano T400 V-Brakes round out the components and make it a very well-equppped king of the road. As many of the reviews have stated, the bike is heavy. But to me, that translates to a nice smooth and stable ride. I could almost ride down a set of stairs no-handed on my 520 its so stable. But I will not.

Part of that heaviness comes from the back rack that comes with the bike. The online reviews just rip on the rack, but mine has been serving me quite well. Granted it hasn't been loaded with a full touring load for extended periods of time. It certainly isn't the best rack out there, but it will get you a good ways down the road.

If I was looking for another bike today, would I still buy a Trek 520? Hell yea, but I don't anticipate mine will ever need replacing :) 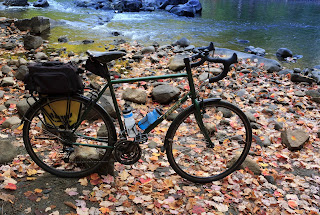 Posted by dudeonabike at 8:55 AM