Getting Cold up North

Well, the peak foliage seems to have came and went. The mornings and evenings are much cooler now, winter is clearly on the way. Due to this I have found it hard to get on the bike and go for a ride on some days. When I don't get out and ride, I can't really post on dudeonabike.com. If I'm not a dude on a bike that day, now can I? The worst part is, its not even really cold yet. I've got my fixed gear setup on the trainer inside the apartment, and that is fine for rainy days and such. Still it is not as fun as riding outside where bikes are meant to be ridden. In spite of this cold, I  managed to make it out for a nice twenty mile ride last week along the Northern Rail Trail.

I've ridden this trail so much since moving to Lebanon I almost know it like the back of my hand. So when the weather was forecast to be sunny after a few days of clouds and rain, I decided to take advantage of it and hit the trail before sunrise. I wanted to catch the sunrise over Mascoma Lake. My plan was to grab a nice long exposure shot of the sailboats which are usually anchored just off the bank by the Shaker Village Sailing Club. However, when I arrived there, I noticed all the boats that used to be anchored there were now long gone and all that was left was buoys. At this point the sun was just starting to peak over the mountains in the distance. 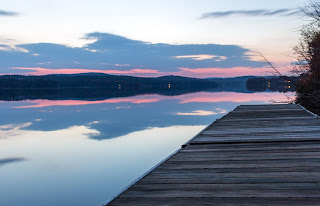 I rode over the bridge to the boat launch to see if I could get some decent shots from there. I was treated to a pretty nice sunrise. As I sat there on the side of the lake I couldn't help but be impressed with the view that was unfolding before me. When I first arrived at the launch it was still a bit dark, but in a few minutes the sun began rising rapidly. As it rose the colors in the sky changed from blue, purples, yellows, and oranges. it was the first time I have swatched a sunrise in a loing time. It was very relaxing to just sit there in the crisp fall air and observe the lake waking up to start the day. 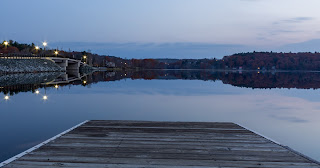 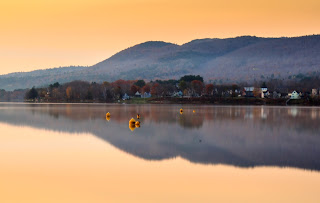 After that I decided to head over to a little dam that can be seen from the rail trail hoping to snap some shots of the water falling over the dam. While the light was still soft in the morning hours. It was a good spot and I liked some of the shots I came home with. The river seemed to be really rolling along due to the recent rain and I think they are draining Mascoma Lake for the winter. 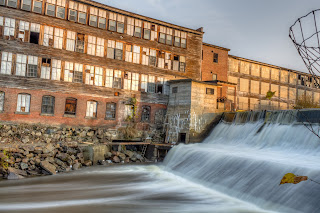 I only saw one other cyclist in the pre-dawn ride to the lake. However, once the sun came out and warmed the air, the trail came to life and there were many other cyclists, walkers, and joggers. Somehow the rail does not bore me yet, even after travelling hundreds of miles on it.

Today is election day here in the good ol' U S of A. So I'm off to do my civic duty. Then I'm going for another ride, since the weather is actually kind of nice today. I have no doubt the looming winter temperatures are not far from taking hold of the area.
Posted by dudeonabike at 8:37 AM No comments: