Today was another glorious day for cycling through the New Hampshire countryside. So far all the riding I have been able to do has been absolutely amazing. But today was even more amazing as I had the rare treat of the company of an amazing woman. Last night and this morning we were thinking about where to head off for a nice ride today. We considered a couple options, the Northern Rail Trail, the Upper Valley Trails Loop, etc, but then we decided on Lebanon to Lyme. I did most of the same ride a few days ago and was blown away by the fun I had on some of the climbs and descents in between Hanover and Lyme on NH route 10. So we decided on that route with the only real plan being to ride to Lyme. I missed the turn off on E Thetford Rd the last time I came through and was looking forward to at least identifying it for future rides.

Man my girl can really fly on her new bike. I'm so used to being waaaay ahead, it is really great to turn back and see her right on my wheel sometimes even when I've been mashing it pretty good. At one point I saw someone gaining on us just outside of Hanover. I don't think either of us particularly enjoys getting smoked by some senior citizen (and there's plenty of badass ones around these parts) so I hammered down. Just as sure as ice cream melts in the sun, there's my beautiful lady right behind me at the bottom of a pretty fast descent. The pursuing cyclist was not in sight. 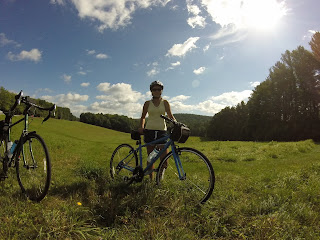 After making it to Lyme we stopped at the church/old cemetery for a quick drink of water and then turned back toward E Thetford Rd. I wasn't really planning on exploring it, but while we were stopped we looked at google maps and decided we could take E Thetford Rd to River Rd and then take that back out to route 10 to return to Hanover and finally to Lebanon. So we mounted up and we were off once again with nothing but new roads and new adventures ahead.

Sometimes I like not having a solid plan or at least being flexible with my plans and in doing so, often times the unexpected detours are a real treat. Today was one such unexpected detour that just couldn't have been any better. Route 10 between Hanover and Lyme is not bad riding whatsoever, but there are sometimes a lot of cars moving pretty quick. So when we detoured down E Thetford Rd things started getting quieter real quick. We even saw the cows we had been smelling since we rolled into Lyme. there was some light traffic on E Thetford Road, but we quickly made our way to River Rd and hung the sharp left at the bottom of a hill to access it.

I was a little worried when we did turn left onto River Rd because there was a sign saying "Road Closed .10 mile" I thought to myself though, "Heck, it's only a tenth of a mile and I'm on a bike that has been through closed roads before." Sure enough about a tenth of a mile into the road it is indeed closed to vehicular traffic by some large concrete barricades. I'm not really sure why it is closed, because the road actually seemed fine. There was ample space between the barricades to fit a bike through, so we continued right along. River Rd is almost a cycling utopia due to the very light traffic, the rolling hills, the great scenery, and well, you get the idea. 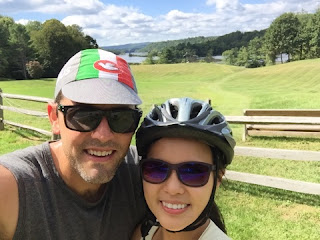 There were some hills but they seemed much more rolling than the ones we either toiled up or screamed down on route 10 on the way to Lyme. Some of the houses along the river are just amazing. There are some frequent great views of the river and the mountains surrounding it during the ride along River Rd. Some places are very peaceful and quiet. We even stopped for a few minutes right on the side of the road for a quick Rip Van Waffle and photos of the river. A few miles later we even saw a deer. It was as though it wasn't even afraid of us. I stopped and tried to get my camera out, but as soon as I did it fled away into the cover of the woods.

At the end of River Rd there is a pretty good climb back up to route 10. We hooked a right and climbed and cruised our way back to Hanover. Then was the part both of us weren't too keen on...the climb back to Lebanon. It wasn't too bad though and we dispatched the climb without too much difficulty. It was a little warm out, but I'm not complaining because I have an idea we're in for the coldest winter of both of our lives this year. So we better enjoy the warmth while its here. But I have no doubt we're truly going to enjoy and make the most of what New Hampshire has to offer. 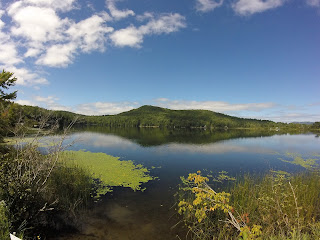 Posted by dudeonabike at 2:56 PM