Island Line Rail Trail - You Gotta Do it!

Monday night we were planning our next adventure which would take place on Tuesday, since we both had the day off. Somehow my girlfriend stumbled across this ride on some Island Line Rail Trail. At first I was thinking, "yea sure, another rail trail, cool I guess". Then she showed me the pictures, and I was blown away. After those images, I was pretty stoked to check this ride out. This particular section of rail trail goes several miles out into Lake Champlain, the nations sixth largest lake. During the summer there is a bike ferry that will take you across "the cut" a 200 foot gap in the Colchester Causeway to South Hero and Grand Isle. After Labor Day it only runs on Fridays, Saturdays, and Sundays until October 10th.

We headed out Tuesday morning and headed to Airport Park. The drive from New Hampshire was really pretty. We found the park pretty easily and headed out to the trail. The weather was pretty much perfect and we were enjoying the start of the trail even if there was some loose gravel and I was sliding along with skinny tires on my fixed gear. After a short ride through some wooded area and gentle hills, the trail suddenly opens up to the lake. It really is a sight to behold as you begin to realize the scope of the monumental effort it must have taken to build this thing way back in 1900. 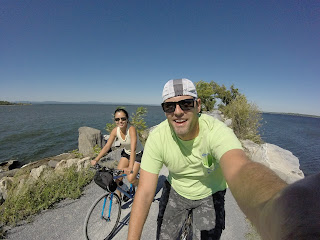 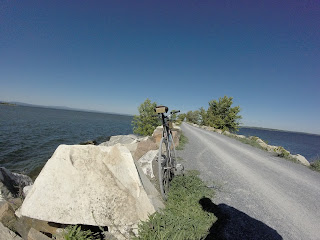 As we effortlessly tooled down the trail we kept thinking it might have been all downhill, but I kind of knew better. The wind was pretty stiff. I even saw some waves crashing against the causeway that reminded me of ocean waves hitting a rock jetty. I was really surprised with the size and beauty of Lake Champlain. The lake is filled with cool looking islands surrounded by crystal clear waters. When we arrived at the cut, we noticed the ferry was not in service. I halfway thought it may have been due to the wind, but realized it is post-Labor Day and that is the more likely reason. We grabbed a few pics, and headed back. But then I noticed this pretty good sized sailboat headed right to the causeway at a pretty good clip. It looked like he was going around 15-20mph. I stopped to see what might happen. I didn't think he would be approaching the cut with his sails out and moving that fast. But sure enough he shot right through it towing his inflatable dinghy as well. 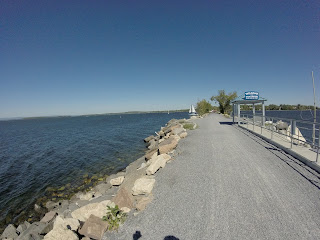 On the way back toward Airport Park we were confronted by an angry headwind. It was really brutal on my fixed gear too since I have been really accustomed to riding with multiple gears lately. I constantly found myself reaching down for a barend shifter like on my Trek 520 I have been riding usually. I was really mashing the pedals to get through the wind and back into the relative calm in the more woodsy section of the trail. Once there we made pretty good time back to the park. 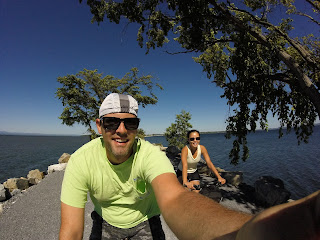 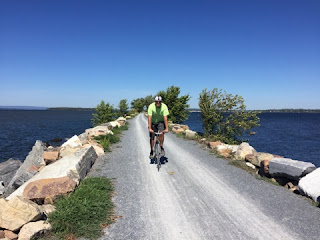 We stopped to use the restrooms there and refill top off our water bottles. We did this because it was only like three and a half miles out to the cut and we still had a lot of gas in our tanks, so decided to continue on to Burlington. Across from the park, the trail does indeed continue on to Burlington which is only a few miles away. In between the park and Burlington is an amazing little beach too. Actually I think there were a couple of them. But we stopped at a really nice one.

We made it into Burlington and stopped in at Foam Brewers. This place is a pretty cool little brewery with good beers and a cool atmosphere. We also had a killer cheese and salami plate. After indulging ourselves a little we hit the waterfront, to check out the views and grab a couple more photos. Burlington seems like a really cool place. I think we will definitely be doing the rail trail again and checking out more of Burlington in the future. The islands in Lake Champlain will be neat to check out too. 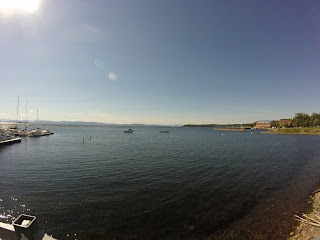 If you go maybe these links below will be helpful:
Bike ferry info
Map
Island Info

Posted by dudeonabike at 8:38 AM