The day before my birthday we headed out for another gorgeous New Hampshire bike ride. This time we went to the coast and road from Hampton Beach up to Odiorne State Park via the 1A. There and back totals nearly thirty miles making it a good ride for us as we can shoot down to the coast, ride and get back to our part of the state at a reasonable time. The ride along the 1A is pretty amazing as far as the scenery goes. Most of the road offers a pretty good shoulder. There are some spots where it gets a little tight, but the speed limit is usually low and drivers are generally courteous this time of year.

Post-Labor day, and being a weekday I was surprised at the number of people visiting the beach. There was still plenty of parking though, so it was no big deal. The beach here is very wide and the waters are really clear. There was ample room to toss a Frisbee, football, or even fly a drone. 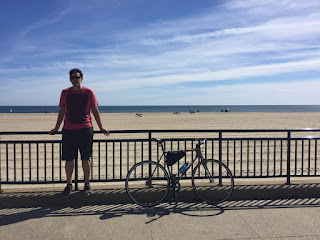 The weather was fabulous, maybe a touch on the warm side, but otherwise great. Most days since I've moved to New Hampshire have been really nice up to this point. I'm sure that will change in the near future, which is why we have been trying to take advantage of what's left of the nice weather. I wonder if my blog will get updated more frequently when old man winter arrives.

For this ride there is not much climbing, so I broke out the trusty Scrambler fixed gear, which does not see much use where I live in the mountains. It was nice to ride fixed again mostly effortlessly gliding along the scenic coast with my best friend. 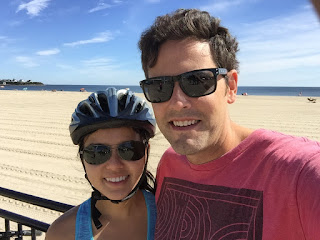 We rode the almost fifteen miles to Odiorne Point State Park. We had a small picnic in this park which has some interesting history. Initially the land was the summer home of native Americans. Later colonists made it their home. Then in 1942 the government bought all the land and used it as a coastal defense in world war two. The evidence of this is all around if you look closely. The park is a great place to stop and refuel and really take in the great views. 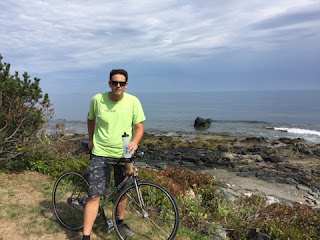 We turned around and made our way back along the scenic coast to Hampton Beach. Here we took a nice stroll and looked at all the closed shops and stores. They really close the place down after Labor Day. We did find a restaurant that was open and had a great view of the beach from their rooftop deck seating, the Sea Ketch. Here we enjoyed a well earned and tasty lunch. Of course after our great meals of lobster roll and fried oysters, it was time to head back to the mountains.

Posted by dudeonabike at 8:30 AM